,” human factors mac-daddy, Jakob Nielsen, and co-author Raluca Budiu, give us a primer on all the dumb mistakes it’s possible to make in your mobile apps and sites. Some of them are painfully obvious, some of them not as much. Here are ten good things I learned.

Sadly, we’re learning old lessons again, just on new devices. Do any of these sound familiar?

Might seem obvious, but touch screens aren’t very good for text input and fine manipulation. Virtual keyboards are hard to type on, and tapping on the intended screen area is often a challenge.

Users are more reluctant to use mobile devices for functions that require a lot of input. This is one big reason why mobile devices are largely content consumption devices.

Something that makes me smile every time I hear it, is the assumption that visitors are going to kick back, relax, put up their feet, grab a cocktail, and spend a couple hours exploring your product. This proves the point that we’re terrible observers of our own behavior, because no one freakin’ does this. Users are just trying to get things done.

Users spend 99% of their time on other sites or apps.

People use their mobile devices in transit, or for killing time; their time is even more limited than usual. If you’re lucky enough to get their attention, you need to get them to their goal, post haste. Accept this as truth, and design for it.

4. Early registration will cost you business

No one wants to sign up first, and then start using your app. That’s early registration, and in a lot of cases, it’s dumb and unnecessary. Early registration especially sucks on mobile because providing input is considerably more painful than on a desktop.

Don’t take before you give.

Except in the rare cases when users absolutely can’t use the features of your app without signing up first, you’re going to be turning away business with early registration. Do you really need all that info up front? Probably not. 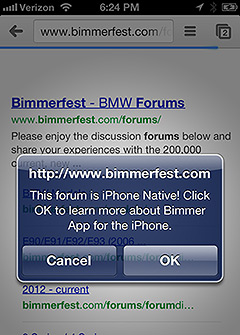 The annoying splash/loading/launch screen has made a comeback. If you’re old enough, you might remember cutesy animated splash screens that were all the rage in the early days of the Web. These attempts at whiz-bang appeal were simply time wasters; they only kept you from what you were trying to do. And rightly so, they became a design faux pas.

O’ how short our collective memory, because they’ve made a comeback in forms like the mobile launch screen, startup sounds (ahem, Skype), and — my personal favorite — the dreaded “Download Our App!” popup, commonly seen on arrival to an Internet forum.

6. Text on mobile is twice as difficult to understand

It’s just text on a page, right? How could it be that on a mobile device, understanding the same text is twice as hard? Turns out that reading through a peephole makes everything harder, because:

This makes it that much more important to speak the user’s language, and cut out the fluff text, jargon and fancy words.

If in doubt, leave it out.

Phones are personal devices used on-the-go in short bursts, whereas tablets are often shared and used in a more relaxed setting. What this means exactly for your app will vary, but in general, it means tablet users are using these devices for longer periods of time. They’ll be somewhat more willing to browse, explore and interact.

Does this mean you can slack on tablet usability? No. Tablet UIs still suffer from low discoverability of features, low memorability for gestures and accidental activation of touchable areas.

8. Users only remember the most common gestures

Gestures (tap, swipe, pinch, etc.) might seem like a great space-saving alternative to using a lot of chrome in your mobile app. Rather than clutter things up with lots of buttons, just have the user learn some new gestures, the thinking goes. The possibilities are fairly limitless, right?

It turns out that it’s hard to remember much more than the standard tap and swipe gestures. Remember, users spend 99% of their time not using your app, so the odds that they’ll remember your non-standard gestures aren’t great.

Stick to the few more-familiar gestures.

It also doesn’t help that interaction design between apps is inconsistent. This means that gestures that work a certain way in one app — even a simple swipe —often do something completely different in another. This makes learning gestures especially difficult.

A great point that Nielsen & Budiu make is that the user experience (UX) with your mobile site or app is part of your branding. You may have worked hard to make sure your product is really usable on the desktop, because you know those values are reflected in your brand. But is it also optimized for mobile? It almost certainly demands a different design, and if you’re not paying attention to these particularities, you’re degrading your brand when users have to suffer through a degraded mobile experience.

Another great point is that just because you have a great user interface (UI) doesn’t mean you have a great UX. Is your customer support also up to snuff? Does your product give users what they want? Does the flow make sense? The non-UI interactions must also be great.

We’re at a stage now where native mobile apps have better success rates than mobile Web apps, so given that your resources support it, ship mobile apps. But don’t forget, as mobile platforms fragment and screen sizes vary more, the cost of mobile development will increase.

The authors also suggest that future mobile strategy will move to the Web as HTML5 becomes more capable, as well as for other reasons like better content discoverability and cheaper cost of development.